In the past 19 years, our club has donated over $50,000 to help address critical women’s issues such as violence against women, trafficking for sexual exploitation, women’s health concerns, female genital circumcision, child marriage and so much more.

Did you know these facts? 120 million women give birth every year.  86% deliver in developing countries. 60 million of these are women who either don’t have the assistance of a traditional birth attendant or no assistance at all.  Half a million women die annually in childbirth, many from infection, tetanus and other complications. For every woman who dies in childbirth, around another 30% (15 million) incur injuries and infections, many of which are disabling, embarrassing and lifelong.

With those sobering statistics in mind, the Zonta Clubs of Cheektowaga-Lancaster, Hamburg-Orchard Park and Buffalo, as well as student volunteers, gathered at the Cheektowaga Senior Center on May 12, 2018 to assemble 989 birthing kits to be sent to women in need around the globe.

The kits include supplies such as gauze, plastic sheeting and soap that help create a cleaner, safer birthing environment for the woman and the child.

In addition to the plastic sheet, gauze and soap, the complete kits — which cost less than $2 each — contain gloves, a razor blade and a length of string or cord, which controls bleeding from the baby’s umbilical cord.

These completed birthing kits go to nongovernmental organizations, many of which are church groups, to be distributed.  In the past, kits assembled by the Cheektowaga Lancaster Zontians have gone to Uganda and Haiti, for example.

While the kits themselves are critical components to safer births, they are temporary, and their usefulness is limited.  However, the NGOs preach sustainability and involve the women on the ground when they deliver the kits.  These organizations then train local women to serve as midwives for delivery of babies.

Zonta International, which, along with its local affiliates, seeks to empower women through service and advocacy, has been assembling birthing kits for more than a decade, and the Cheektowaga Lancaster club has participated for about eight years. For the last few years, the effort has been a collaboration with Hamburg-Orchard Park, and this year was the first time the Buffalo chapter joined the other two. Additionally, Z-Club members, essentially school-age Zontians, from Depew helped with the assembly.

Overall, the goal is larger than the assembly day itself.

That’s what we’re trying to do, not just get these kits out, but also to educate people about the problem that is out there in underdeveloped countries and what they can do to help. 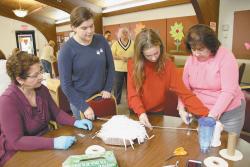 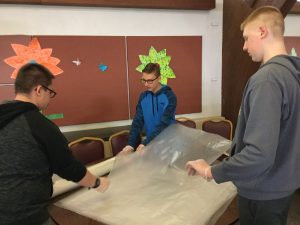 Justin Dwiklinski, Max Mages and Tyler Cloen, all students at Depew High School, cut plastic sheeting to be used for the woman in labor to lie on. 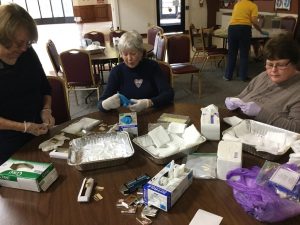 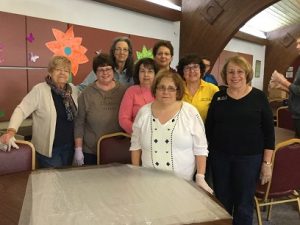 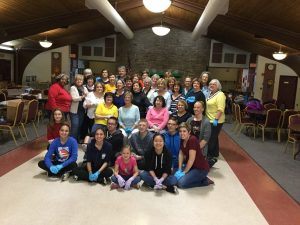 All of us worked together to assemble 989 birthing kits.