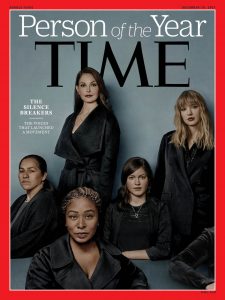 The Me Too movement (or “#MeToo“), with local alternatives in other languages) is an international movement against sexual harassment and assault.   #MeToo spread virally in October 2017 as a hashtag used on social media to help demonstrate the widespread prevalence of sexual assault and harassment, especially in the workplace.  It followed soon after the public revelations of sexual misconduct allegations against Harvey Weinstein.

The phrase was popularized by Alyssa Milano when she encouraged women to tweet about it and “give people a sense of the magnitude of the problem”.  The response on Twitter included high-profile posts from several celebrities including Gwyneth Paltrow, Ashley Judd, Jennifer Lawrence, and Uma Thurman.

The Me Too movement was chosen as Time Person of Year in 2017.

On May 25, 2018, Weinstein was charged by New York Police Dept. with “rape, criminal sex act, sex abuse and sexual misconduct for incidents involving two separate women”  following a month long investigation. After surrendering to police, he was handcuffed and appeared in court before Judge Kevin McGrath.  If convicted on the most serious charges, Weinstein could face between 5 and 25 years in prison.

Weinstein was later released on a million dollars cash bail and agreed to surrender his passport and wear an ankle monitor confining him to Connecticut and New York. His lawyer Benjamin Brafman said Weinstein intends to plead not guilty. His next court date is June 30, 2018.